Sometimes appearances can be deceiving. The general public may consider J.P. Morgan a financial services firm – which it certainly is – but with over 40,000 technologists globally, it could also be classified as a technology firm. With technology transforming banking and financial services, along with every other sector, just about every company today needs to have workers with relevant IT skills. In 2017, everything and anything tech is a focus for J.P. Morgan.

“We have to compete with the Googles and other tech firms,” says Supriya Doshi, head of HR for Singapore at J.P. Morgan. “It means we need to get creative not just with our recruitment but also how we engage employees throughout their tenure with the company.”

Indeed, J.P. Morgan is looking beyond conventional recruitment solutions to hunt for talent, not just for traditional banking roles but also for operations and technology roles.

Tapping into the next generation
As part of a global initiative, the firm kicked of its annual campus recruitment campaigns in March with pop-up café at leading universities. In Asia-Pacific, for example, the cafés appeared at universities in Australia, Hong Kong and Singapore. The campaign aimed to attract undergraduates from across multiple disciplines for careers with the firm, in addition to educating them about the company before they have the chance to ‘opt out’ of pursuing certain career paths due to misconceived notions that they might not be suitable or have the right skills and background.

Doshi says that last year’s Singapore event saw over 1,000 students take part, of which 650 showed a keen interest in J.P. Morgan and registered for upcoming events and program information.

The Central Forum at the National University of Singapore (NUS) campus at Kent Ridge Park (pictured) was transformed into an al fresco-style café where over a period of four hours students were able to network with former NUS graduates who have since embarked on successful careers with J.P. Morgan.

The pop-ups are designed to provide a relaxed and informal setting for students to engage with the bank’s employees over coffee and snacks in order to learn more about the company. 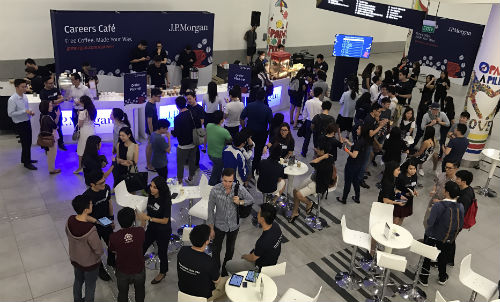 “This is a great opportunity for students to get to know J.P. Morgan, our people and our culture in a casual setting,” says Doshi. “By bringing in analysts and associates who were once in their shoes, the students are able to get tangible career advice and get more insights on a career in financial services industry.”

Doshi adds that the initiative has extra resonance in Singapore, which has always been a competitive market for talent, not least at graduate level.

“We welcome students from all disciplines and majors, not just business or finance,” she says. “An inclusive and diverse workforce makes smart business sense. Bringing together employees with different backgrounds, experiences and perspectives enables us to produce more innovative ideas and better solutions for our clients.” Doshi relates that her summer intern in 2016 was a physics major. “She had an interest in HR and we made her a full-time offer in HR,” Doshi explains. “So it’s all about reaching out to populations that might not be obvious candidates to apply for roles at J.P. Morgan.”

There are certain traits that the firm is on the lookout for. Students must be eager to learn, have an interest in financial services, have well-rounded experience inside and outside of the classroom, and have demonstrated ability to master new skills via strong academic performance.

Tech hubs
The firm has several strategic technology hubs scattered throughout the world, with one being Singapore. The technology hubs allow different technology focus areas – such as cloud, robotics and blockchain – to be co-located in one area. Each tech hub harnesses innovation and thought leadership, and also provides L&D options to the wider J.P. Morgan employee base.

“Our technology population globally is fairly significant and has grown in the last few years, despite challenges in financial services,” says Doshi. “I think we’re becoming a magnet for that talent – that’s part of the reason why we’re on campus doing innovative things; we’re trying to position ourselves so people know they’re coming into a firm that is investing in tech and investing in cloud, robotics – the future. We’re not afraid of the fintech firms as disruptors; instead we’re looking to work with them, to partner with them.”

Doshi says the tech focus, as well as the campus recruitment initiatives, can be a tonic for existing employees who have weathered uncertain economic conditions for some time. The financial services sector in particular has witnessed a tough couple of years.

“When you see that growth is still happening in the junior talent ranks you don’t get as nervous about joining a new firm.” 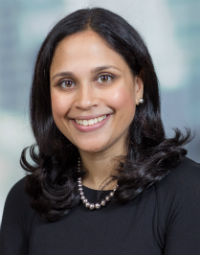 Supriya Doshi proudly describes herself as “a J.P. Morgan lifer”. She started as a summer intern with the firm in 1999 and then converted into a full-time analyst role following graduation from university in the US. She then went through the firm’s corporate analyst development program, which rotated across multiple functions in the corporate business.

After a number of rotations she placed into the investment bank technology group. During those four years she was involved in HR-related activity – recruiting on her campus, diversity events, mentoring – and it piqued her interest. Ultimately in 2004, she transitioned into HR and worked in L&D and as a business partner.

She also undertook a six-month assignment in London. She made the move to Singapore just under two years ago. “My first HR job was actually doing technology training,” she says. “This is the advice I give a lot of people. If you have a competency in something – for me at that time I knew technology systems – and you want to get somewhere else, find that anchor and then try to get to where you need to go.”

A focus on innovation
Technology tends to go hand-in-hand with innovation and J.P. Morgan is taking steps to ensure the creative ideas of employees are not neglected. The firm recently held its global innovation week, involving different innovation themed events around the world. In Singapore, for example, the company invited guests from New York and Hong Kong, as well as fintech experts and specialists involved in cloud and robotics technology, to take part in panel discussions and webcasts. In addition, the company’s employees tackled real business challenges by holding a hackathon. “I was a judge for the Singapore hackathon,” says Doshi. “We had a tonne of great ideas. It’s been a while since I was fully involved in technology but I was able to follow what was happening and listen in. They were literally building prototypes and demonstrating them. Many of these will be implemented and go into production.”

Doshi says one great example was an idea for a virtual assistant – and while most of the innovations are intended for internal use, some may make their way into enhancing the client customer experience.

In September, the firm will be taking the hackathon concept to the next level by hosting the Code for Good challenge – a firmwide recruitment event whereby undergrads compete in a day-long hackathon, coding to solve challenges for non-profit organisations.

$9.5 billion
In 2016, J.P. Morgan spent more than $9.5bn in technology firm-wide, of which approximately $3bn is dedicated toward new initiatives.

$600 million
Of that amount, approximately $600m was spent on emerging fintech solutions – which include building and improving digital and mobile services and partnering with fintech companies.

32%
Attracting, retaining and developing top talent is a priority and the firm casts a net far and wide to find the best and the brightest. In 2016, 32% of senior hires in technology globally came from non-financial services firms. J.P. Morgan’s employee training programs cover new skill sets, such as cloud and agile development.

Future priorities
A key focus for Doshi and her team, as well as the firm in general, is ensuring it’s attracting the right diverse talent mix into the company. “We definitely make an effort to make sure when we’re recruiting that we’re hiring the best and most qualified candidates but also keeping in mind the elements of diversity,” she says. “In Singapore, we want to hire local talent and we want to ensure we’re hiring women into tech.”

It’s significant that J.P Morgan was deemed a ‘top performer’ in the diversity & inclusion category of HRD’s own Employer of Choice Awards in 2016, as this is a priority for the company. As just one example of progress in this area, each year regional diversity councils run internal leadership development programs specifically aimed at diverse talent. These diversity councils are supported by business resource groups which are composed of over 20,000 J.P. Morgan employees. For example, the Women’s Interactive Network (WIN) holds conferences and invites guest speakers into the firm. WIN also provides access to the tools that enable the successful development, advancement and retention of women at all levels of the firm. New hires are also introduced to the firm’s approach to D&I during induction.

“It’s something we’re passionate about, and you’re hearing about it not just in the recruitment process but from day one and then all throughout your career here,” says Doshi. “At J.P. Morgan we have global themes and global messages – and diversity is certainly one of those themes.”

On a more personal note, in early September Doshi announced her journey with company will continue; she will return to New York in a senior role at J.P Morgan, no doubt keen to build the next chapter of a career that has already had a taste of global success.

How can an organization maintain its core values in a period of growth?